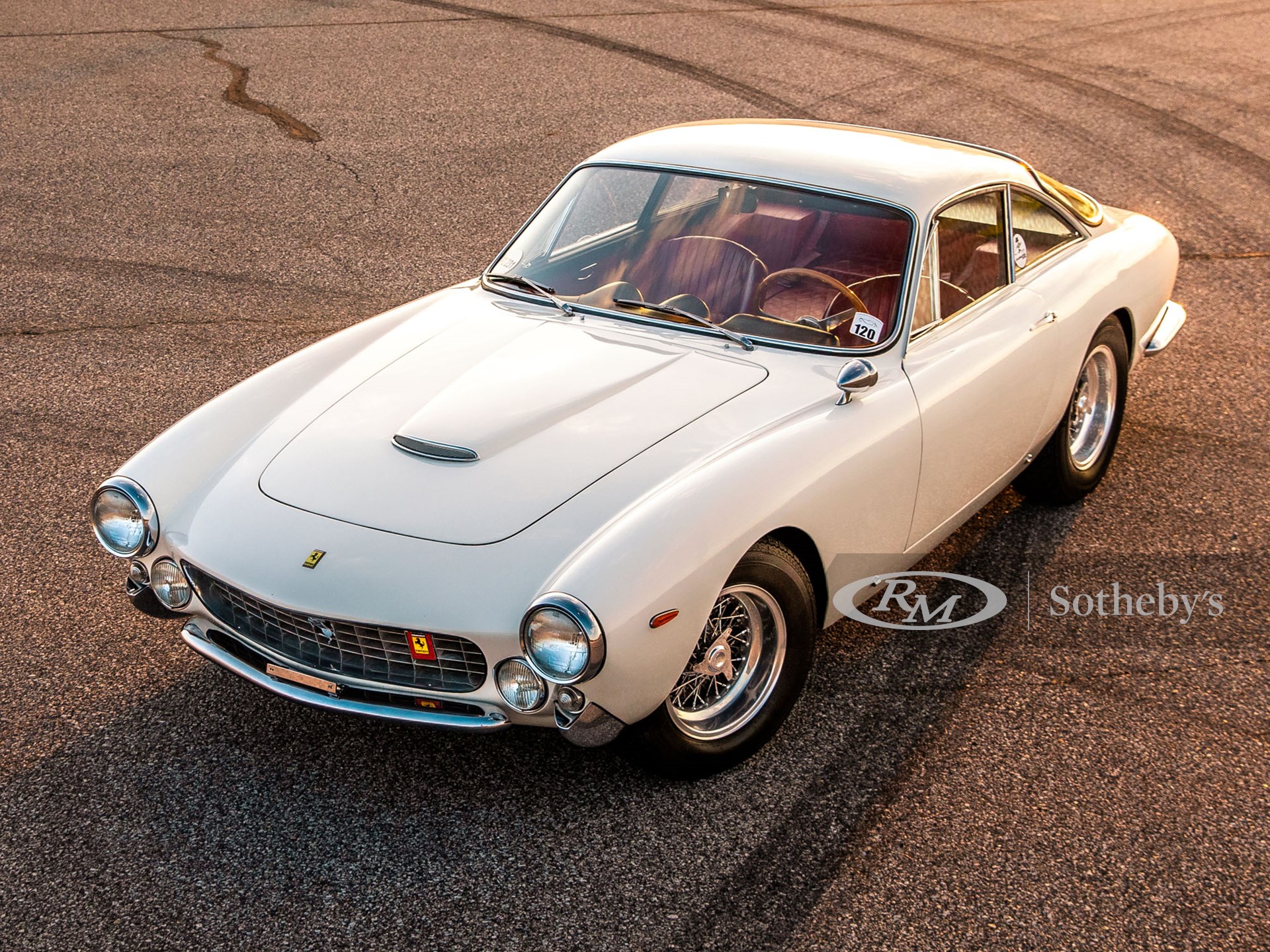 The Ferrari 250 GT/L berlinetta, known simply as the “Lusso,” is without a doubt one of the most successful and visually arresting grand touring cars ever built. The apogee of the 250 GT platform’s mechanical development, the model further benefits from a sporting exterior that is among the most acclaimed designs of all time. Introduced at the 1962 Paris Salon as a replacement for the 250 GT coupe, the Lusso (Italian for luxury) also featured an all-new interior arrangement highlighted by a revised dash panel and leather upholstery throughout the cabin.

Mechanically, the Lusso’s Tipo 168 U engine was the ultimate 3-liter development of the long-running short-block Colombo V-12, incorporating the outside-plug ignition and single-cylinder porting that had proven so successful in the 250 Testa Rossa and California spider racing variants. This fantastic base was further bolstered by chassis improvement that included four-wheel disc brakes, a suspension with Koni shock absorbers at each corner, and a rear Watts linkage that had been perfected on the legendary 250 GTO.

Scaglietti’s realization of Pininfarina’s design proved to be one of the coachbuilder’s most beautiful creations yet, with classic early cues like the egg-crate grille and delicately curved fenders giving way to long, flowing proportions, ample glass all around the luxuriously trimmed cabin, and a fastback profile punctuated by a Kamm tail. Originally owned by jet-set luminaries and celebrities such as Steve McQueen, the Lusso was built in a modest quantity of just 350 examples over roughly two years of production. As essentially the final and most developed evolution of the revered 250 GT lineage, the GT/L has since become one of Maranello’s most collectable production models.

Chassis 5379, offered here, was the 235th Lusso produced, and the only example ever provided in this Avorio over Rosso color combination. Completed on 22 February 1964, it was delivered new to the Greenwich, Connecticut dealership of noted Ferrari proselytizer, Le Mans legend, and privateer racing personality Luigi Chinetti. At the time, Chinetti was still the sole US-distributor for the Italian marque; passionate, enthusiastic Ferrari ownership in America remained a relatively small, chummy club.

By 1968 chassis 5379 had been acquired by Carl Johnson of Homewood, Illinois. A well-regarded custodian, collector, and treasurer of the Ferrari Club of America since its earliest days, Johnson exhibited the car at every available opportunity during his four years of ownership, with several Ferrari anthologies, newsletters, and contemporaneous sources documenting chassis 5379’s condition. At some point in the summer of 1972, Johnson sold the car to Dr. Walter Bayard—a North Carolina ophthalmologist and, evidently, a more private caretaker. Bayard and the car are documented as having been present at the May 1974 FCA National Meet in Stone Mountain, Georgia, reportedly the only evidence of Dr. Bayard having exhibited the car during his short stewardship. Within months, chassis 5379 was acquired by the late Dr. Raymond Boniface, of Poland, Ohio, from whose collection it is now currently offered.

Dr. Boniface was an exceptional collector of all beautiful Italian machines, though his most notable arena of curatorial expertise was clearly that of V-12 Ferraris. His passion for Italian automobiles was born of his time spent in the country during World War II. Honorably discharged from Army service in 1946, his time stateside proved brief; Boniface returned to his ancestral homeland in 1948 to enter medical school at the University of Bologna.

The university proved a convenient location from which to explore the finest facilities of Italian automotive brilliance; Maranello (Ferrari) and Modena (Maserati) were both just 30 miles away, while Milan (Alfa Romeo) proved a leisurely 150 mile drive north, and Turin (Fiat/Lancia) a 210 mile drive west—all convenient distances in contrast to the expansive frame of reference for American drivers. By the time the newly christened Dottore returned home to Ohio and set up shop, he was already planning his first new acquisition: a 1955 Alfa Romeo Giulietta spider. Though countless Italian cars passed through Dr. Boniface’s finely curated collection over some 65 years, very few have been so thoughtfully preserved as his 1964 Lusso.

Upon acquiring 5379 in the summer of 1974, Dr. Boniface promptly returned the Ferrari to a regular exhibition schedule, and the car was a regular guest at many FCA and concours events over the next 30 years. In 1988, a full repaint and cosmetic restoration was executed by Joe Piscazzi’s American Auto Body of Akron, Ohio. Eleven years later, it was documented as the feature car in issue number 133 of the FCA’s Prancing Horse magazine. While the car was repainted years ago it still presents nicely today, especially with its beautiful accenting brightwork. It retains a fender-mounted mirror and rides on a set of period-correct 15 × 6.5-inch Borrani wire wheels are presently shod in bespoke Pirelli P5 Cinturato tires. The front grille’s FCA badging and rear mounted “prancing horse” have both been present on this chassis since the late sixties, as evidenced by accompanying provenance.

The interior of 5379 is quite likely the most well-patinated, highly original condition ever presented on a Lusso of such pedigree. Nearly every conceivable leather, wood, rubber, and chrome surface is displayed with a charming degree of patina and age-related wear. The original Rosso Connelly leather still retains a deep, beautiful luster despite many decades of motoring. Large, age-related splits in the upper dashboard appear at near-identical locations in each of the central gauge housings—another key indicator which substantiates claims that 5379 has been preserved to an extremely high degree. According to testimony from the Boniface heirs, the only known non-original interior components currently present are a pair of bespoke, cut-to-sample replacement floormats executed and installed by Jeff Kilmer, head upholsterer of the General Motors Design Center’s Trim Shop. Kilmer was careful to excise the original, factory heel pads and insert them into the replacements.

Spurred by a 2017 clutch failure, Dr. Boniface’s family finally elected to complete a mechanical servicing of the car, with his well-informed sons politely referring to the process as “deferred maintenance.” A volume of accompanying invoices from Fowler Automotive of Glenshaw, Pennsylvania detail over $30,000 of work completed to rebuild, overhaul, tune, and replace a significant number of components. The cooling, fuel, exhaust, ignition, electrical, and brake systems were each respectively repaired during this process. Additional mechanical work on the transmission, rear axle, engine, and rear Koni shocks was commissioned and completed after further consultation.

Shortly thereafter, 5379 was exhibited at the 2017 Concours of America in St. Johns, Michigan, where it claimed Best in Class. Having been driven just 46,770 miles at the time of cataloging, this highly original Lusso is full of character—offering a glimpse into 45 years of keen custodianship, exhibition history, provenance, and everything else that comes with driving a classic, blue-chip Ferrari in America. Copies of the build sheet have been provided which verify 5379 retains its numbers-matching powertrain, including the engine, gearbox, and rear differential.