There are some really exciting collector car auctions coming up in the next couple weeks – Mecum and Barrett-Jackson, both in Texas – but with the passing of Labor Day we also witnessed the Fall Auburn 2021 sale at the Auburn Auction Park. There were a few surprises in Auburn, so let’s go over some of them now.

A Bottle of Tomato Juice at Fall Auburn 2021 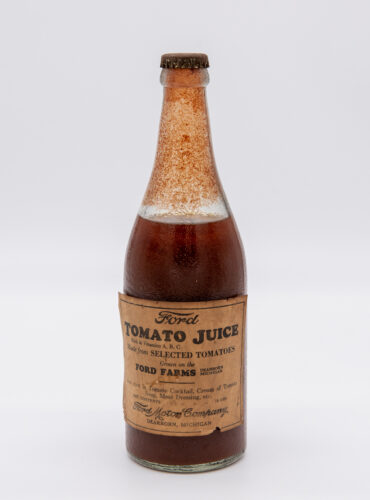 This tomato juice came from Henry Ford’s farm and was bottled by Ford – the company – about 100 years ago. So that’s how it ties in with the automotive scene. Why did it sell for that much? There are a couple possible explanations.

First off, the most obvious is the connection to the man himself, Henry Ford. Grown on his farm, bottled by his company, as absurd as it may sound, this tomato juice is connected with the most well-known pioneer of the automotive industry in the world. Much more so than pretty much anything else. Again, it’s weird to write this, but you can’t deny that there is a definitive connection between Mr. Ford and the tomato juice. Some collectors just really want to own a piece of history.

The other way to look at this is actually in addition to the first point about the connection to Henry Ford. This may be telling us something about the market overall. We didn’t see much of anything selling below the pre-auction estimates – unless it was something that didn’t sell at all due to a reserve price – so this may be a sign of people starting to invest in automobilia again. It’s a sometimes under-appreciated area of the collector car world.

We really haven’t seen a lot of upwards movement in terms of values in the world of automobilia in recent years, and this could be the start of a new trend. Granted, we’ll have to watch the market a while more before we can say with certainty whether it is a sign of the overall market, or just someone who really wanted that specific bottle of tomato juice, but if it’s the former then we’ll see some interesting sales in the coming months.

One piece of advice to the new owner of this bottle of juice – no matter how many likes, views, or retweets you think it might get – do not drink it. There is no way that ends well.

We saw some negative reactions to the Superbird offered by RM Auctions on social media. Not many people expected it to sell within the pre-auction estimate, let alone above the high-end of the estimate, but we watched the gavel fall and witnessed the 1970 Plymouth Superbird sell for an all-in price of $220,000.

One comment we received was a bit of a lowball at $125,000. And honestly, we can understand the reasoning behind that. This Superbird has an automatic transmission and we’d all prefer our Superbirds to rock a four-speed and three pedals, along with its 440 cubic-inch V8. But this may be another sign of trends in the market – we’re seeing muscle cars with automatic transmissions sell for higher prices than expected, closer to what their manually-shifted counterparts are worth.

There are a number of factors behind this, although right now we’re genuinely not sure which one is at play here. It could be down to the usual purchasers of these cars aging and wanting something they can just cruise in, rather than the more visceral experience that a manual transmission offers. It could also be the opposite – the younger a collector is, odds are they’ve had less experience with manual transmissions so if they start branching out into muscle cars, maybe they’re looking for an automatic because it’s what they’re used to driving. It’s difficult to say.

One thing we do know is this – this car was good enough for Ray Evernham – of NASCAR fame – so really, it’s probably good enough for anyone else lucky enough to get their hands on it. We wish the new owner of Superbird #637 the best of luck with their new car – and if you bought the car specifically because of the automatic transmission we’d love to hear your thoughts on it!

Okay, come on. This had to be joke, right? There must’ve been a couple people with a ton of money who were just messing with each other… right? It’s a bus! A yellow bus! If it didn’t say “Yellowstone Park Company” on it, we’d just assume it’s a school bus! But it does say “Yellowstone Park Company” on the side of this yellow bus, and it is in great condition, and it’s the 27th of only 98 examples built for Yellowstone National Park.

It has a modern V8 under the hood, paired with an Allison three-speed automatic transmission, all tied together with power steering controlled by a modified period steering wheel. If you’re talking tour buses circa 1936, this is probably the most enjoyable one you’d ever have a chance to drive. Or be driven in.

Add to that the 3000-watt power inverter – so you can run the Christmas lights and your margarita machine – and suddenly this bus sounds more like a party than a calm tour through one of our great national parks. But the real reason it sold for $550,000? Way more than the pre-auction estimate of $100,000 to $150,000?

This was a charity sale. According to RM Sotheby’s, “Proceeds of the sale will benefit The Bighorn Basin Paleontological Institute.” And that’s the ticket to this sale – charity donation, modern engine and power steering, and plenty of power to run whatever drink machines your next party needs. Just try to keep it down if you’re actually in a national park – don’t want to bother the animals!